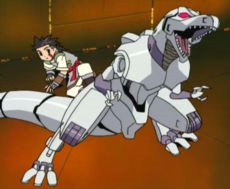 From a quirky mad scientist to a heroic freedom fighter to loyal ancient robots, Dave took on a few fun roles in this wildly popular series, Zoids Chaotic Century.

With loads of Character Voices at his disposal, Dave brought a ton of versatility to Zoids Chaotic Century. This video firstly features the voice character, Dr. D, a scientist with some helpful insight when it comes to ancient civilizations.

Dave also performed the role of Rosso, as seen at the end of this video, but it was the multiple organoids that made for a vocal workout. Of course Zeke is the most notable of the heroic ancient beings, but Dave also provided VO for Ambient, Specular and Shadow.

Check out a more of Dave’s VO projects HERE.