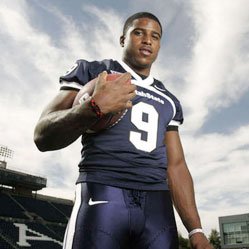 A general attitude towards the sports program at the schools of the Western Athletic Conference. An ominous and thoughtful voiceover gives color to the dedication of their athletes. The WAC has experienced tremendous success.  Over the past six years, it has won 54.5 percent of its bowl games, the third best winning percentage of any conference in the nation.

The WAC has sent a total of 22 teams to bowl games (12-10) in that period.  Boise State has won 76 games since joining the conference, the most in the nation during that time span (2001-07). For the second year in a row, the WAC sent a team to a BCS bowl game as Hawai‘i earned a Sugar Bowl bid this past season following Boise State’s unforgettable victory in the 2007 Fiesta Bowl.  In men’s basketball, the WAC has sent at least two teams to the NCAA Tournament in 23 of the past 25 seasons.  Every current school in the WAC has competed in the NCAA Tournament since 1990.  In baseball, the WAC has boasted two national champions in the past five years including Fresno State’s College World Series victory in 2008.  In women’s sports, Fresno State softball has competed in every NCAA Tournament ever held while Louisiana Tech basketball has played in all but two.