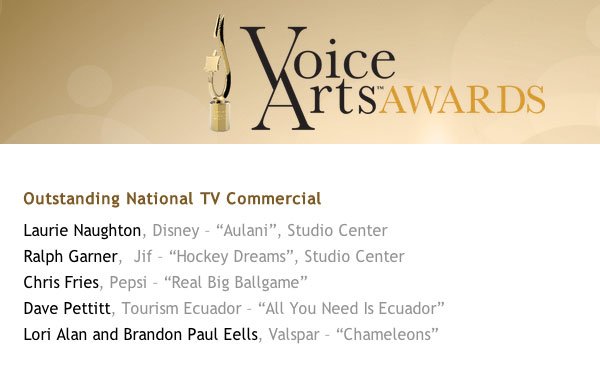 What a way to wake up this morning. Mindi mentioned yesterday that the nominations were going to be released today for the 2014 Voice Arts Awards. She’s on that kind of thing. While I slip into the booth with a cup of jamaica tea and slate full of jobs/auditions, she’s busy making sure people remember who I am. Twitter this. Facebook that. YouTube a little of everything.

There were a few things on the radar today before I made the mandatory social media break. The Voice Arts Awards had completely slipped my mind. It wasn’t until I hopped onto facebook myself that I saw voice over people talking about the nominations.

A campaign for Tourism Ecuador I recorded earlier this year has made it as a finalist!! I skimmed over all the other awards for names I knew and people to congratulate, but I have to admit, I kept scrolling back to the top to make sure they hadn’t changed their minds. Now I have a screen cap to prove it just in case they do.

To see all the other 2014 Voice Arts Awards nominations check out http://sovas.org/2014-nominees/

Wishing all my fellow nominees the best of luck. Don’t get me wrong. I want to win this one!
But I love this industry and the people in it.

See you in New York on November 9th-10th!

The :60 spot nominated for the Outstanding National TV Commercial is here:

You can see the long form of the Ecuador commercial here

The mission of the Society Of Voice Arts And Sciences™ (SOVAS™ ) is to galvanize the global voice acting community: connecting job seekers to the consummate sources of training, education, mentoring, and employment opportunities required to create and sustain a successful career in the voiceover industry. Our mission is accomplished by putting diversity, equality, and inclusion first. Through the ongoing development and administration of programs featuring educational events, financial scholarships, job placement, meaningful networking opportunities, and awards recognition through the Voice Arts® Award program, we intend to elevate the value of the art and craft of voice acting, such that it is fully respected as a vital element of media communications, art, and humanitarianism.